This is my third time hosting an online art lesson, so it was easier than before. I taught the kids how to make two different types of bow ties. We first started out by folding two pieces of ribbon in half and putting double-sided tape in the middle. After that we shaped two bow ties, and tied they up with string, so it would the right shape. Then, we used to a hot glue gun to fasten a thinner piece of ribbon around the middle of the previously shaped bow ties. Lastly, we glued the bow tie down to the hair clip, and we were done with the first bow tie. We then repeated the process again, but this time using wider ribbon and gluing it onto a hair tie instead. In the end, the kids were left with two stunning bow ties, that they could wear on Independence Day. 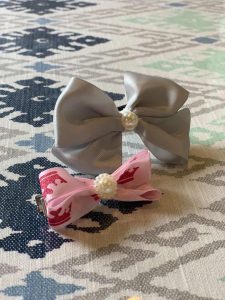