Going into this craft, it was my first experience leading and teaching an activity. The idea of developing, designing, and administering a craft was originally quite daunting, but help and support naturally came along the way.

Guiding my thinking along the idea of our current season, Fall, I determined that it would be most suitable to create a festive, seasonal craft. After researching, I came across an article including the paper pumpkin. This idea was perfect, as it was the ideal balance between challenging and simple, and this craft could also serve as a unique decoration piece.

Once the idea was formed, I created it with the measurements provided from the article. The end result was around the size of a baseball, and the whole process was quite quick and easy. I decided to further customize it by creating my own measurements. This included increasing the size of the layers, adding an additional layer, and calculating and reducing the top and bottom layer ratios to best mimic the pumpkin outline. Following this, I constructed two more pumpkins according to my new design, and began preparing for the activity, such as collecting and cutting sticks for the pumpkins’ stems. 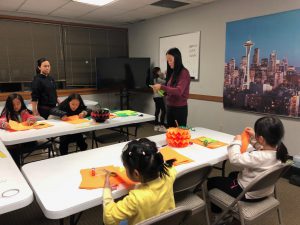 On the day of the activity I arrived around 30 minutes early to prepare. With the help of others, we successfully set up the tables and chairs, distributed the materials, and arranged the room so it was ready for the activity. As it was my first time teaching, near the beginning I felt a little intimidated, however as the activity progressed, helping and guiding the children came instinctively. With assistance from volunteers and parents, I am proud to say everyone created a unique, original paper pumpkin. 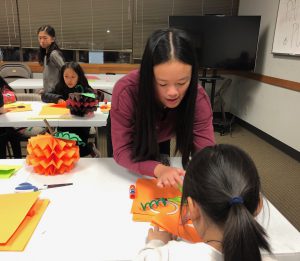 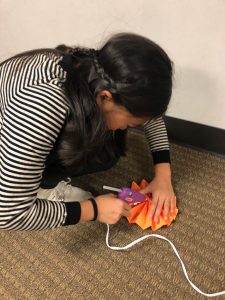 This whole experience, from beginning to end, was very educating and rewarding. This activity taught me about the importance of teamwork, as multiple people were involved through the design and execution process of this project. In the end, it was very gratifying watching the children so enthusiastic and patient while making their pumpkins and finally carrying their creations, which are bigger than their head, home.